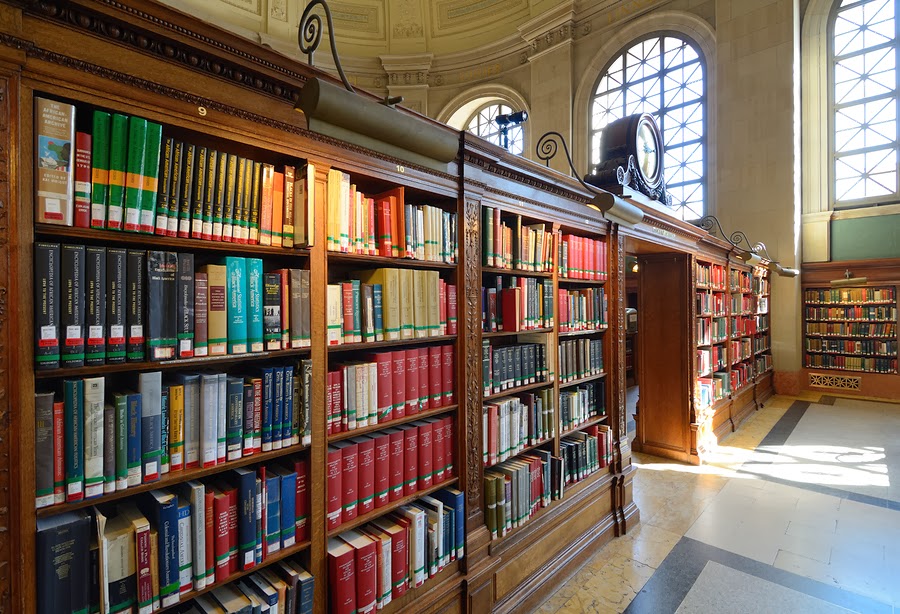 This is picture prompt week. The library is a perfect scenario for writers. Click on the writer's name to go to their blog and read their post. All posts are limited to 300 words, no more, no less. Enjoy
JEAN JOACHIM (Contemporary Romance)

“This is where you’re hiding out,” a male voice said. Jory looked up into the frowning face of George Barton.
“What do you want?” She squinted.
IRIS BLOBEL (Sports Romance)
Cocking a questioning eyebrow at her, he replied, “I do eat. And I happen to be a good cook.”
V. L. LOCEY (M/M Historical Romance)
I wrapped both sets of reins around the hitching post, patted my deputy on the shoulder, then entered the Carson Butte Railway Depot.
JILLIAN CHANTAL (Contemporary)
Maybe the lady wasn’t loony tunes after all.
LINDSAY DOWNS (Regency Romantic Suspense)
“You’re welcome. As agreed you may look at the book but it cannot leave the house,” Eli told him.
STEFAN ELLERY (Mystery)
Trish pulled the book off the shelf causing dust to fly around her, she coughed and waved her hand in the air to clear the dust. She must have been the first to touch the book in ages.
TRISHA FAYE (Historical Fiction)
“Behave on the field trip,” Bea called to Mae, who was leaving for school.
SHERRY GLOAG (Romance)
None of it mattered to him any more. But he, like her, had faced decisions, made his choices in life.
SARAH CASS (Contemporary Romance)
Craig leaned against a shelf waiting. At her wink, he slipped into step behind her.
KATHLEEN BALL (Western Romance)
Anora’s eyes widened as they approached the house. She expected a small dwelling with creaky steps not a big, two story, expensive house with a beautiful front porch and brick steps.
JAMIE SALISBURY (Contemporary and Historical Romance)
Max glanced down the long aisle separating the two long rows of books that seemed to go on and on and on. She felt her stomach as it churned in nervous anticipation.
TRICIA ANDERSEN (Steampunk Romance)
He was startled by soft, sensual lips pressed against his.  He wrapped his arm around Emma and held her tight to him as he touched her cheek with his other hand.  He wiped her tears away.
DAVEE JONES (YA, Paranormal Romance)
Finding Love ina Black Lagoon
"There isn't a book written in the world that could capture everything I'm feeling right now."
MORGAN K. WYATT (Contemporary Romance)*
The Inheritance
Old stone face actually made a joke. Was her mouth hanging open?
* Due to computer issues, Morgan is using a different picture.
Posted by Jean Joachim Books at 5:46 PM No comments:

WELCOME! Click on the writer's name to go to their blog and read their story. Don't forget to return and read the works of our other, talented writers.
JEAN JOACHIM (Contemporary Romance)
Scent of Love
She’s wearing her pouty face. Sulking. Do I even want to know? Probably not.
V. L. LOCEY (M/M Historical Romance)
Moving with as much haste as possible, I opened the remaining drawers.
JILLIAN CHANTAL (Contemporary)
Wheeling in to the parking lot behind the place, she was surprised to find several local police cars there.
IRIS BLOBEL (Sports Romance)
Tyra had the best intentions to protest, right up until his mouth touched hers. The second she felt his warm lips, her heart began to beat faster in her chest and wanting exploded inside of her.
MORGAN K. WYATT (Contemporary Romance)
The Inheritance
“You’re sleeping in my room? In my bed?”
TRISHA FAYE (Historical Fiction)
What to do? What to do? What on earth possessed her?
LINDSAY DOWNS (Suspense)
Finally, the pressure on her chest stopped but the forced air didn’t, except it wasn’t as hard as before.
SARAH CASS (Historical Paranormal)
“How close is he now?”
She knew it was a test, but whether by his urging, or her own instinct, she was compelled to answer.
STEFAN ELLERY (Thriller)
The chief hurried down the red carpeted foyer oblivious to Karol who was keeping a close distance. She could smell her story on him.
TRICIA ANDERSEN (Steampunk Romance)
His lifted his head to say thanks.  His parted lips met hers as she kissed him deeply.  As the kiss broke she took the basket from him.  “I will put this away and make us breakfast."
KATHLEEN BALL (Western Romance)
There was no way he’d allow her to go free now, not after three years. No, he’d rather see her dead than happy and he couldn’t take the chance she’d talk.
DAVEE JONES (YA, Paranormal Romance)
Finding Love in a Black Lagoon
“Owen, there are times in my life when I feel ashamed, but, most of the time, I’m happy with who I am…you know the person deep down inside of me.”
SHERRY GLOAG (Light Paranormal)
“He came back last night…” The sharpness of Sue’s voice cut through her fantasies like a meat cleaver.
Posted by Jean Joachim Books at 7:50 PM No comments:

Welcome to Tuesday Tales! Click on the writer's name to go to their blog and read their story. Remember to come back and get to all the writers. Thank you so much for coming!
JEAN JOACHIM (Contemporary Romance)

The Scent of Love
“Bryce, Bryce…isn’t that the most beautiful name? He must be sooo handsome.”  Chrissy danced around the kitchen, waving a dish towel.
V. L. LOCEY (M/M Historical Romance)
“She died because I am a coward."
LINDSAY DOWNS (Suspense)
“Code Blue. Code Blue. Code Blue.”
IRIS BLOBEL (Sports Romance)
She had the most beautiful laugh. Then, without thinking, he leaned in and touched her lips with his in a short, sweet kiss.
JILLIAN CHANTAL (Contemporary)
“The coroner said it was an accident.”
MORGAN K. WYATT (Contemporary Romance)
The Inheritance
A little more joy would be nice. Didn’t he realize she was giving him everything that meant anything to her?
TRISHA FAYE (Historical Fiction)
“You’d better git on outta here. Yore a gonna be late.”
STEFAN ELLERY (Thriller)
Karol strained her ears to try to make sense of the conversation they were having. It was difficult, the auditorium was built for sound to fill the room so it could reach the ears of every listener.

SHERRY GLOAG (Regency Romance)
She’d made her choice, set her path and intended to stick to it without thought or further consequence to her family.
TRICIA ANDERSEN (Steampunk Romance)He glanced down into her eyes, the light from the moon twinkling in the deep blue.  His heart thundered in his chest as he felt his resolve slip away.
DAVEE JONES (YA, Paranormal Romance)
Finding Love in a Black Lagoon
Owen leaned back slightly and scowled. “You aren’t as dang tough as you pretend. And, even if you were…well.”

Posted by Jean Joachim Books at 5:48 PM No comments:

Welcome! This week the word prompt is "field". Click on the writer's name to go to their blog. Don't forget to come back and read everyone's story. Thank you for coming.
JEAN JOACHIM (Contemporary Romance)
The Scent of Love
It was all she could do to train her gaze on the book and away from the handsome military man sitting up in a bed next to her.
V. L. LOCEY (M/M Historical Western)
“So, do we ride back to Laco for provisions, or do we ride across Price land to investigate this baffling clue from Charlie the Chinese Butler?”
IRIS BLOBEL(Sports Romance)
“You’re early. You can’t get enough of me it seems,” he said. Tyra stood, eyes wide open, then turned and walked away.
LINDSAY DOWNS (Suspense)
She’d met Edmé last year when Martina and Toby had been kidnapped by a psycho diamond smuggler.
TRISHA FAYE (Historical Fiction)
Bea’s leg twitched in agitation, flexing as if in motion.
SHERRY GLOAG (Fiction)
“Oh my.” Laura’s awed voiced dropped into the gleeful silence. “I’ve wondered for years what happened that night.
JILLIAN CHANTAL (1950's Historical)
"They’re transporting him to the hospital now.”
STEFAN ELLERY (Thriller)
Kelley Verdant, walked down the stage in perfect cadence to the music the orchestra was playing, her long black hair crested down her shoulders and neck. Karol sniffed and pulled at her own pitch black hair that was just as long and silky as the singer’s.
DAVEE JONES (YA/paranormal romance)
Finding Love in a Black Lagoon
"Owen’s voice became uncharacteristically gruff. “I said I would be okay, I’m a grown man. Dammit, you aren’t my mother.”
SARAH CASS (Historical Paranormal)
As for himself, Dell’s stomach still twisted into knots. He didn’t understand why he’d physically felt Leilyn’s pain at the forceful blast sent her direction.
TRICIA ANDERSEN Steampunk Romance)
There was awkward silence as Gideon fought to acclimate to his surroundings.  Emma squeezed his hand.  “Tell me about being a dirigible pilot.”
MORGAN K. WYATT (Contemporary Romance)
The Inheritance
Well, be that way. I’ll show you who the better man is. Make that woman.
Posted by Jean Joachim Books at 5:50 PM No comments: